Background
The Siege of Derry lasted from April 18 to July 28, 1689 during the Williamite War In Ireland. In the “Glorious Revolution” of 1688, James II (King of England, Ireland, and Scotland) a Roman Catholic convert, was ousted from power by his Protestant daughter Mary and her husband William of Orange. Most of the Irish Population were catholic, and James had given them some real concessions during his reign. James readmitted Catholics into the Irish Parliament, public office, and the army. Irish Catholics also hoped that James would re-grant them their land, which had been seized after the Cromwellian conquest of Ireland. James looked to Ireland to muster support in re-gaining his kingdoms. Richard Talbot, who was acting as James’s viceroy in Ireland, was eager to ensure that all strongholds in the country were held by garrisons loyal to James. In November 1688, Enniskillen and Derry were the two garrisons in Ulster that were not wholly loyal to James. On December 10, King James fled London. In London on February 13 1689, William and Mary were crowned. On March 12 1689, James landed in Kinsale (on Ireland’s south coast) with 6,000 French soldiers.  He took Dublin and marched north with an army of Irish and French Catholics.

The Siege
The Derry City Governor, Lieutenant Colonel Robert Lundy, turned away reinforcements led by Colonel Cunningham, which had arrived in River Foyle, telling them that the city was to be surrendered. Lundy called a meeting with several of his most loyal supporters to discuss surrender. News of the meeting spread which angered many of the citizens. That night, Lundy went out in disguise and many others left the city and took a ship to Scotland. The city’s defense was overseen by Major Henry Baker, Colonel Adam Murray, and Major George Walker. As the Jacobite army neared, all the buildings outside the city walls were set alight by the defenders to prevent them from being used as cover by the besiegers. The Jacobite army reached Derry on April 18. King James and his retinue rode to within 300 yards of Bishop’s Gate and demanded the surrender of the city. The city said no, and some of the city’s defenders fired at him. James kept asking but they kept saying no, so the siege began. James returned to Dublin and left his forces under the command of Richard Hamilton.  The Goodship MountJoy was the reason the city was set free.  The ship broke down the blockade that was blocking the city from access to food. The city endured 105 days of siege during which some 8,000 people of a population of 30,000 were said to have died. 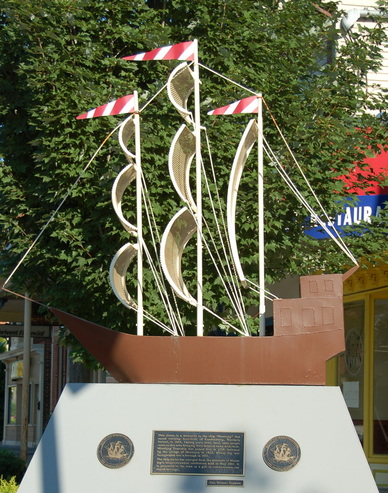